Home » »Unlabelled » Please Do Not Attempt This At Home. I Am A Professional

Please Do Not Attempt This At Home. I Am A Professional 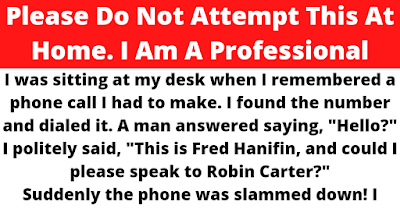 Now get this: I was sitting at my desk when I remembered a phone call I had to make. I found the number and dialed it. A man answered saying, "Hello?"

I politely said, "This is Fred Hanifin, and could I please speak to Robin Carter?"

Suddenly the phone was slammed down! I couldn't believe anyone could be that rude. I tracked down Robin's correct number and called her. She had transposed the last two digits. After I hung up with Robin, I spotted the wrong number still lying there on my desk. I decided

Later in the year the phone company introduced caller ID. This was a real disappointment for me - I would probably have to stop calling the *******. Then one day I had an idea. I dialed his number. When I heard, "Hello?" I made up a name. "Hi. This is the sales office of the telephone

company and I'm just calling to see if you're familiar with our caller ID program?"

The reason I took the time to tell you this story is to show you how, if there's ever anything really bothering you, you can do something about it! Just dial 823-4863!!

An old lady at the shopping center really took her time pulling out of a parking space. I didn't think she was ever going to leave. Finally her car began to move, and she started to v-e-r-y slowly back out of the slot. I backed up a little more to give her plenty of room to maneuver.

"Great," I thought, "she's finally leaving." All of a sudden, a black Mercedes came flying up the parking aisle, going the wrong direction, and pulled into her space. I hit the horn and started yelling, "You can't do that. I was here first!"

The guy climbed out of his Mercedes, completely ignoring me. He walked toward the shopping center as if he hadn't heard me. I thought to myself, "This guy's an *******. There's sure a lot of *******s in this world." Then I noticed he had a "For Sale" sign in the back window of his car. I wrote down the number. Then I hunted for another place to park.

A couple of days later, I'm sitting at my desk. I had just gotten off the phone after calling 823-4863 and yelling, "You're an *******!" (it's really easy since I have his number on speed dial now). I noticed the phone number of the guy with the black Mercedes laying on my desk and figured I'd better call this guy, too.

After a couple of rings, someone answered the phone and said, "Hello?"

I said, "Is this the guy with the black Mercedes for sale?"

"Can you tell me where I can see it?"

"I'm home in the evenings."

"Listen, Don, can I tell you something?"

After I hung up, I added Don Hansen's number to my speed dialer. I must say, for a while things seemed to be going much better for me. Now when I had a problem, I had two *******s to call.

Then, after several months of calling the *******s and hanging up on them, it just wasn't as enjoyable as it used to be. I gave the problem some serious thought and came up with a solution:

He said, "Stop calling me."

I answered, "1802 West 34st Street. It's a yellow house and my black Mercedes is parked out front."

Then I picked up the phone and called the police. I told them I was at 1802 West 34th Street and that I was going to kill my gay lover as soon as I got home. Then I made another quick call to Channel 13 about the gang war going on down on West 34th Street.

After that, I climbed into my car and headed over to 34th Street to watch the whole thing.

Glorious satisfaction -- watching the two *******s kicking the crap out of each other in front of six squad cars, a police helicopter, and a news crew was one of the greatest experiences of my life .

The story you have just read is true - but the names have been changed.