NEVER TICK OFF A NURSE 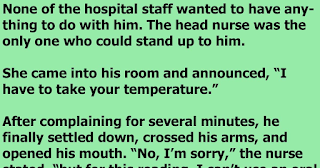 A big shot business man had to spend a couple of days in the hospital.

None of the hospital staff wanted to have anything to do with him.

The head nurse was the only one who could stand up to him.

She came into his room and announced, " I have to take your

temperature". After complaining for several minutes, he finally settled

down, crossed his arms and opened his mouth.

thermometer". This started another round of complaining, but

eventually he rolled over and bared his behind. After feeling the

nurse insert the thermometer, he heard her announce, " I have to get

something. Now you stay JUST LIKE THAT until I get back!"

She leaves the door to his room open on her way out. He curses

under his breath as he hears people walking pass his door laughing.

After a half hour the man's doctor comes into the room.

"What's the matter, Doc? Haven't you ever seen someone having their

temperature taken?" After a pause, the doctor confesses,

"Not with a Carnation."