Home » »Unlabelled » a salesmanship car ran out of gas.

a salesmanship car ran out of gas. 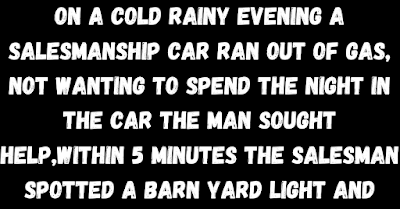 On a cold rainy evening a salesmanship car ran out of gas, not wanting to spend the night in the car the man sought help,within 5 minutes the salesman spotted a barn yard light and proceeded to it.

He knocked on the house door and an older farmer greeted him there.

The salesman explained he had ran out of fuel and asked the farmer if he had any to purchase.

The farmer invited the salesman in for a spell and told him he would help in the morning  as it was raining.

The salesman told the farmer he would wait for him in the car but the farmer insisted he spend the night in the barn ,the farmer also told the salesman he only had one bed where his daughter was already sleeping but it was big enough for two people.

The farmer told  the salesman not to mess around with his daughter.He put an egg in the middle of the bed and told him he would know if they had messed around as the egg would be broken.

Sure enough the farmers daughter and the salesman started messing around with each other and the egg broke spilling yolk all over the bed.The daughter was in tears fearing for the life of the salesman.

The salesman assured the young lady that he was a super glue salesman and he could glue the egg back together again once the egg was completed they both fell asleep on their respective sides of the bed.

Morning came and with it the farmer with a cast iron pan,picked up the egg and cracked it over the pan ,realising nothing had come out he picked up his shotgun,his daughter was fearful and asked about the shotgun.