Home » »Unlabelled » A tad naughty - Paddy is 85 and lives in a Senior Citizens Home.

A tad naughty - Paddy is 85 and lives in a Senior Citizens Home. 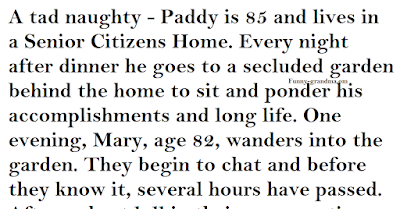 A tad naughty - Paddy is 85 and lives in a Senior Citizens Home. Every night after dinner he goes to a secluded garden behind the home to sit and ponder his accomplishments and long life. One evening, Mary, age 82, wanders into the garden. They begin to chat and before they know it, several hours have passed.
After a short lull in their conversation, Paddy turns to Mary and asks, "Do you know what I miss most of all?"
She asks, "What?''
"Sex." he replies.
Mary exclaims, "Why you old toot. You couldn't get it up if I held a gun to your head!"
"I know," says Paddy, "but it would be nice if a woman could just hold it for a while."
"Well, I can oblige," says Mary, who unzips his trousers, removes his manhood and proceeds to hold it.
Afterward, they agree to meet secretly each night in the garden where they would sit and talk and Mary would hold Paddy's thingie.
Then one night Paddy didn't show up at their usual meeting place.
Alarmed, Mary decided to find him and make sure he was O.K.
She walked around the Senior Citizen Home where she found him sitting by the pool with Ethel, another female resident, who was holding Paddy's's little pal!
Furious, Mary yelled, "You two-timing son-of-a-gun!! What does Ethel have that I don't have?"
Old Paddy smiled happily and replied, "Parkinson's"......................