Home » »Unlabelled » An American on vacation in Paris is having breakfast

An American on vacation in Paris is having breakfast 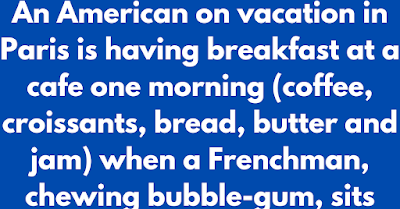 An American on vacation in Paris is having breakfast at a cafe one morning (coffee, croissants, bread, butter and jam) when a Frenchman, chewing bubble-gum, sits down next to him.

The American ignores the Frenchman who, nevertheless, starts a conversation.

Frenchman keeps loudly chewing his gum, and says, “We don’t. In France, we only eat what’s inside. The crusts we collect in a container, recycle them, remake them into croissants and sell them to the States.”

The Frenchman has a smirk on his face. The American listens in silence.

The Frenchman persists: “Do you eat jelly with your bread?”

The Frenchman keeps chewing his gum, and says, “We don’t. In France we eat fresh fruit for breakfast, then we put all the peels, seeds, and leftovers in containers, recycle them, remake them into jam, and sell the jam to the States.”

After a moment of silence, the American then asks: “Do you have se*x in France?”

Frenchman: “Why of course we do,” he says with a big smirk.

American: “And what do you do with the condoms once you’ve used them?”

Frenchman: “We throw them away, of course.”

American: “We don’t. In America, we put them in a container, recycle them, melt them down into bubble-gum, and sell them to France. 🤣🤣🤣🤣