Home » »Unlabelled » Blondes Are Not Stupid

Blondes Are Not Stupid 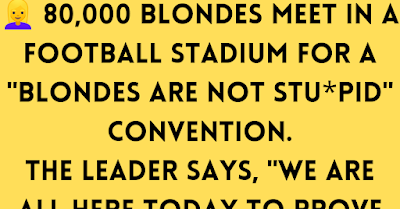 👱‍♀️ 80,000 blondes meet in a football stadium for a "Blondes Are Not Stu*pid" Convention.

The leader says, "We are all here today to prove to the world that blondes are not stupid. Can I have a volunteer?"

A blonde gingerly works her way through the crowd and steps up to the stage.

Obviously everyone is a little disappointed.

The leader says, "Well since we've gone to the trouble of getting 80,000 of you in one place and we have the world- wide press and global broadcast media here, gee, uh, I guess we can give her another chance."

The leader, unsure whether or not he is doing more harm than damage, eventually says, "Ok! Ok! Just one more chance -- What is 2 plus 2?"

The girl closes her eyes, and after a whole minute eventually says, "Four?"