Two priests decided to go to Hawaii on vacation. 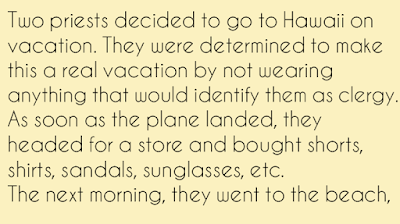 Two priests decided to go to Hawaii on vacation.

They were determined to make this a real vacation by not wearing anything that would identify them as clergy.

As soon as the plane landed, they headed for a store and bought shorts, shirts, sandals, sunglasses, etc.

The next morning, they went to the beach, dressed in their "tourist" garb. They were sitting on beach chairs, enjoying a drink, the sunshine and the scenery when a "drop dead gorgeous" topless blonde in a thong bikini came walking straight towards them. They couldn't help but stare.

They were both stunned. How in the world did she know they were priests?

So the next day, they went back to the store & bought even more

outrageous outfits. These were so loud you could hear them before you even saw them.

Once again the two priests settled on the beach in their chairs to enjoy the sunshine. After a while, the same gorgeous topless blonde, wearing a string, taking her sweet time, came walking toward them.

Again, she nodded at each of them, said "good morning, Father" and started to walk away.

One of the priests couldn't stand it any longer and said. "Just a minute young lady.

"We are priests, and proud of it, but I have to know, how in the world did you know we are priests dressed as we are?"

The blonde turned around and replied, "Father, it's me, Sister Angela!"