Home » »Unlabelled » A zookeeper accidentally let a gorilla loose, and the gorilla escaped.

A zookeeper accidentally let a gorilla loose, and the gorilla escaped. 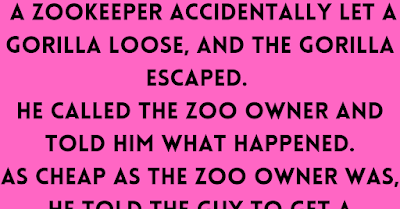 A zookeeper accidentally let a gorilla loose, and the gorilla escaped.

He called the zoo owner and told him what happened

As cheap as the zoo owner was, he told the guy to get a gorilla costume, and replace the gorilla for now, because he didn’t want to buy a new gorilla.

So that’s exactly what the man did.

He ordered a gorilla costume and went to work.

When the people came to see him, he pounded his chest and moved like a gorilla.

He even made the right sounds.

Right under him was the lion’s cage

One day, as he was running around chanting like a gorilla, the bottom of his cage broke and he fell into the lion’s cage

Terrified, he started screaming, ‘Somebody, help me, please!  I am begging you!’.

The lion kept getting closer.  ‘SOMEBODY HELP ME!’ the man shouted even louder.

The Lion ran to him and said, ‘Shut up you im*becile!  You are going to get us both fired.