Carl had this one bad habit that had always disgusted Suzanne 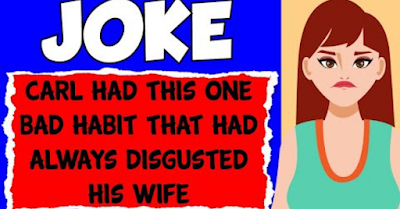 Carl and Suzanne had been married for almost 45 years.

Lovely couple, but Carl had this one bad habit that had always disgusted Suzanne. Every morning, before getting out of bed, Carl would let out this thunderous, paint peeling fart.

Poor Suzanne would just cringe. Over the years she had complained at Carl, ” You know Carl! One of these days, you’re going to fart your guts out. What are you going to do when that happens?”

Carl never took it serious, and just continued on with his morning release, so Suzanne just decided to begin getting out of bed before Carl woke up.

Well, Thanksgiving came along, and Suzanne was up extra early doing prep for that evening’s dinner. As she was preparing the turkey, she came across the giblets and had a devious idea. She took the giblets, went upstairs to the bedroom and carefully placed them in the back of Carl’s boxers. With this done, she returned to the kitchen and carried on with her dinner preparations.

About half an hour later, Suzanne heard this blood curdling scream come from upstairs. She chuckled to herself.

After a couple of minutes, she figured she had better go check in on Carl. As she walked past the bathroom in the upstairs hallway, she saw Carl kneeling naked beside the toilet, pointing his index and middle fingers towards the wall in front of him.

“What’s wrong Carl?” she asked while trying to hold back her laughter.

Carl turned toward Suzanne, a tear running down his cheek, “You were right Suzanne! Jesus Christ, you were right. I actually farted my guts out this morning. And by the grace of God, with these two fingers, I got them all back in.”