She promises not to laugh when he pulls down his pants 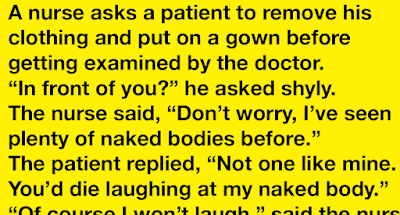 A nurse asks a patient to remove his clothing and put on a gown before getting examined by the doctor.

“In front of you?” he asked shyly.

The patient replied, “Not one like mine. You’d die laughing at my naked body.”

“Of course I won’t laugh,” said the nurse to the patient, “I’m a professional. In over twenty years, I’ve never laughed at a patient.”

“Okay then,” said the patient, slowly undressing.  First he unbuttoned his shirt, took off his pants, and with a sigh pulled down his underwear.

In front of the nurse stood a huge naked male body with the smallest male organ that the nurse had ever seen in her life.  It was almost identical to an AAA battery in length and width.

Unable to control herself, the nurse tried to stop a giggle, but it just came out.

When she realized that she was laughing, she felt very bad for laughing at the patient’s private parts, and composed herself as well as she could.

“I am so sorry,” the nurse said, “I don’t know what came over me.  On my honor as a nurse, I promise that it won’t happen again.  Now tell me, what seems to be the problem?”

The nurse ran out of the room.