Home » »Unlabelled » A man goes in for an interview for a job as a TV news broadcaster.

A man goes in for an interview for a job as a TV news broadcaster. 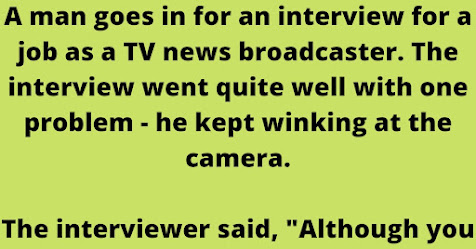 A man goes in for an interview for a job as a TV news broadcaster. The interview went quite well with one problem - he kept winking at the camera.

The interviewer said, "Although you have a lot of the qualities we're looking for, the fact that you keep winking is a real problem. I'm afraid we won't able to hire you unless you get it under control."

"Oh, that's no problem," said the man. "If I take a couple of aspirin I stop winking for a couple of hours. More than enough time to get the broadcast done"

"Allright, show me," said the interviewer.

So the man reached into his pocket. First he put his hand in his right pocket, and as he took it out he pulled out loads of condoms of every variety and size, but no pills.

Next he dug into his left pocket, and again pulled out an embarassing amount of condoms in all shapes and colors before finally finding the packet of aspirin. He took the aspirin and the second take went without a single hitch.

The interviewer said, "That's amazing, I'd hire you on the spot, except that we're not in the habit of hiring such womanizers. We've had too many sexual harrassment suits."

"Excuse me!" exclaimed the man, "I'm a happily married man, not a womanizer!"

"Well how do you explain all the condoms, then?" asked the interviewer.

The man sighed. "Have you ever tried going into a pharmacy, asking for aspirin and winking all the while?"