Home » »Unlabelled » A Scottish couple took in an 18-year-old girl as a lodger.

A Scottish couple took in an 18-year-old girl as a lodger. 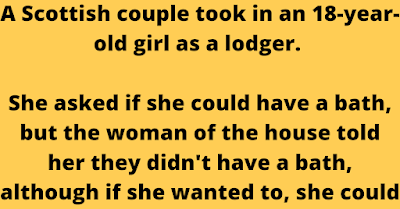 A Scottish couple took in an 18-year-old girl as a lodger. She asked if she could have a bath, but the woman of the house told her they didn't have a bath, although if she wanted to, she could use a tin bath in front of the fire.

"Monday's the best night, when my husband goes out to darts," she said.

The girl agreed to have a bath the following Monday.

After her husband had gone to the pub for his darts match, the woman filled the bath and watched the girl get undressed.

She was surprised to see that the lass didn't have any p"""c hair.

She mentioned this to her husband when he came home.

He didn't believe her, so she said: "Next Monday, when you go to darts, leave a little early and wait in the back garden.

I'll leave a gap in the curtains so you can see for yourself."

So the following Monday, while the girl again got undressed, the wife asked: "Do you shave?" "No," replied the girl. "I've just never grown any hair down there. Do you have hair?"

"Oh, yes," said the woman, and she pulled up her nightdress and showed the girl that she was really generously endowed in the hair department.

The girl finished her bath and went to bed.

Later that night, when the husband came in, the wife asked him, "Did you see it?" "Yes," he said, "but why the hell did you have to show her yours."

"Why ever are you worried about that?" she said. "You've seen it often enough before."