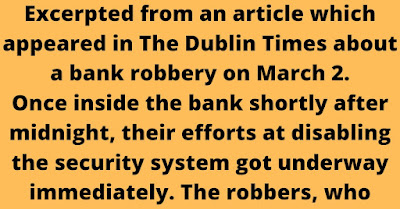 Excerpted from an article which appeared in The Dublin Times about a bank robbery on March 2.

Once inside the bank shortly after midnight, their efforts at disabling the security system got underway immediately. The robbers, who expected to find one or two large safes filled with cash & valuables, were surprised to see hundreds of smaller safes

The robbers cracked the first safe's combination, and inside they found only a small bowl of vanilla pudding.

As recorded on the bank's audio tape system, one robber said, 'At least we'll have a bit to eat.'

The robbers opened up a second safe, and it also contained nothing but vanilla pudding. The process continued until all safes were opened.

They did not find one pound sterling, a diamond, or an ounce of gold. Instead, all the safes contained covered bowls of pudding.

Disappointed, the robbers made a quiet exit, each leaving with

nothing more than a queasy, uncomfortably full stomach. The