Home » »Unlabelled » Joke Of Today: A man was sitting on the edge of the bed, watching his wife..

Joke Of Today: A man was sitting on the edge of the bed, watching his wife.. 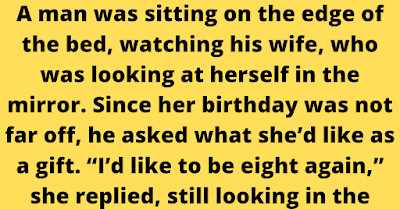 A man was sitting on the edge of the bed, watching his wife, who was looking at herself in the mirror. Since her birthday was not far off, he asked what she’d like as a gift. “I’d like to be eight again,” she replied, still looking in the mirror.

On the morning of her birthday, he rose early, made her a nice big bowl of Coco Pops, and then took her to Adventure World theme park. What a day! He put her on every ride in the park; the Death Slide, the Wall of Fear, the Screaming Roller Coaster, everything there was.

Five hours later they staggered out of the theme park. Her head was reeling and her stomach felt upside down. He then took her to a McDonald’s where he ordered her a Happy Meal with extra fries and a chocolate shake.

Then it was off to a movie, with popcorn, a soda pop, and her favorite candy, M&Ms. What a fabulous adventure!

Finally she wobbled home with her husband and collapsed into bed, exhausted.

He leaned over his wife with a big smile and lovingly asked, "Well dear, what was it like being eight again?"

Her eyes slowly opened and her expression suddenly changed.

The moral of the story: Even when a man is listening, he is gonna get it wrong. 😂🤪

A shy guy goes into a pub and sees a beautiful woman sitting at the bar.

After an hour of gathering up his courage, he finally goes over to her and asks, tentatively, “Um, would you mind if I chatted with you for a while?”.

She responds by yelling, at the top of her voice, “NO! I will not sleep with you!”.

Everyone at the bar is now staring at them. Naturally, the guy is extremely embarrassed and slinks back to his table.

After a few minutes, the woman walks over to him and apologises. She smiles and says quietly “I’m sorry if I embarrassed you. You see, I’m a psychology student and I’m studying how people respond to embarrassing situations”.