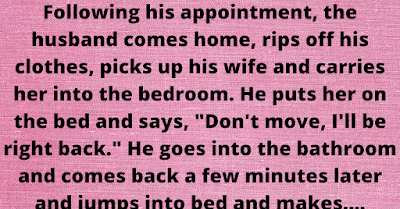 Woman comes home and tells her husband, "Remember those headaches I've been having all these years? Well, they're gone."

"No more headaches?" The husband asks, "What happened?"

His wife then says, "You know, you haven't been exactly a ball of fire in the bedroom these last few years. Why don't you go see the hypnotist and see if he can do anything for that?" The husband agrees to try it.

Following his appointment, the husband comes home, rips off his clothes, picks up his wife and carries her into the bedroom. He puts her on the bed and says, "Don't move, I'll be right back." He goes into the bathroom and comes back a few minutes later and jumps into bed and makes passionate love to his wife like never before.

His wife says, "Damn! That was wonderful!"

The husband says, "Don't move! I will be right back." He goes back into the bathroom, comes back and round two was even better than the first time. The wife sits up and her head is spinning.

Her husband again says, "Don't move, I'll be right back." With that, he goes back in the bathroom. This time, his wife quietly follows him and there, in the bathroom, she sees him standing at the mirror and saying,

His funeral service will be held on Saturday

A young couple, just married, were in their honeymoon suite on their wedding night. As they were undressing for bed, the husband — who was a big burly man — tossed his trousers to his bride and said, “Here, put these on.”

She put them on and the waist was twice the size of her body. “I cant wear your trousers,” she said.

“That’s right, said the husband, “and don’t you ever forget it. I’m the man who wears the pants in this family.”

With that she flipped him her panties and said, “Try these on.”

He tried them on and found he could only get them on as far as his kneecaps. “Hell,” he said. I cant get into your panties!”

She replied, “That’s right, and that’s the way its going to stay until your attitude changes.”