Home » »Unlabelled » The butler and the wife

The butler and the wife 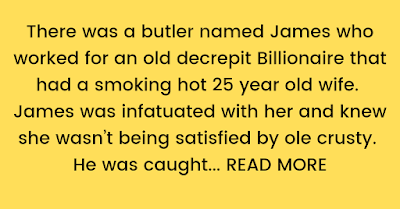 There was a butler named John who worked for an old decrepit Billionaire that had a smoking hot 25 year old wife.

John was infatuated with her and knew she wasn’t being satisfied by ole crusty.

He was caught staring at her longingly more than once and she seemed flattered more than offended so this just reinforced that she was needing something more.

One night he dropped them off at a $5,000 a plate dinner and James returned to the mansion.

About an hour later the wife returned without the Billionaire, unexpectedly.

She told John to follow her up to the bedroom where she closed the door behind them.

She said “John, take off my blouse”

He did as she asked, his fingers were trembling.

She said “John, take off my skirt”

Again he complied with trembling fingers

She said “John, take off my bra”

She said, “John, take off my stockings”

She said “ John, take off my panties”

Again, he complied and his fingers could barely grasp her panties they were trembling so much. This was it..............

Then she said “If I catch you wearing my clothes again John, you’re fired!”