Home » »Unlabelled » Three men died on the same day. And Heaven was getting pretty full

Three men died on the same day. And Heaven was getting pretty full 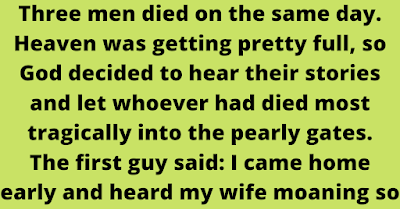 Three men died on the same day. Heaven was getting pretty full, so God decided to hear their stories and let whoever had died most tragically into the pearly gates.

The first guy said: I came home early and heard my wife moaning so I knew she was cheating on me. I looked all around to find the guy, and he was out hanging off the edge of my terrace, bare-@$$ naked. I stepped on his fingers and he fell several stories, but the bast--- was still moving around on the pavement so I dragged my fridge out and pushed it off the terrace onto him. Then I went inside and shot myself.

God did not think this was overly moving.

The second guy said, I was out gardening in the nude on my terrace, and I slipped and fell off the ledge. But, I managed to grab onto the edge of the ledge beneath me.

I thought the guy that lived there heard and was coming out to help me, but then he stomped on my fingers and made me fall several stories to the ground below! Somehow I survived, and was trying to crawl away, but he pushed his refridgerator out and off the ledge of the terrace, and it crushed me so I died.

God thought this was horribly sad, but decided to hear the third man's story.

The third man said: I was screwing around with some guy's wife and he came home early so I hid in his fridge...