Home » »Unlabelled » A Woman Was Sitting In Her Front Garden

A Woman Was Sitting In Her Front Garden 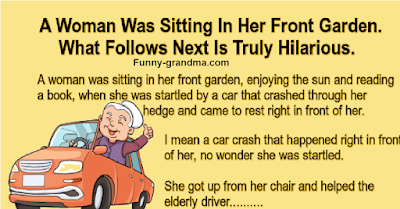 A woman was sitting in her front garden, enjoying the sun and reading a book, when she was startled by a car that crashed through her hedge and came to rest right in front of her.
I mean a car crash that happened right in front of her, no wonder she was startled.
She got up from her chair and helped the elderly driver out of the car and sat her down on a lawn chair.
She asked the elderly driver,
“That was a shocking car crash, are you ok? It’s quite remarkable that you are still driving at your age”.
“Yes”, the elderly woman replied.
“I’m old enough that I don’t need a license anymore”.
“Really”, the woman asked,
“How is that possible?”
The elderly woman replied,
“Well, the last time my doctor examined me, he asked if I had a driver’s license. I told him yes and handed it to him. He took a pair of scissors out of a drawer and as he cut the license into pieces he told me that I wouldn’t be needing it anymore”.
The elderly woman continued,
“So, I thanked him and drove home”.
Article plus récent Article plus ancien