Friday, The Thirteenth, and Karma 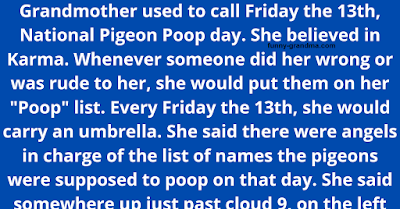 Grandmother used to call Friday the 13th, National Pigeon Poop day. She believed in Karma. Whenever someone did her wrong or was rude to her, she would put them on her "Poop" list. Every Friday the 13th, she would carry an umbrella. She said there were angels in charge of the list of names the pigeons were supposed to poop on that day. She said somewhere up just past cloud 9, on the left side, there was a big window. Then she said there was one for the blue jays on the right side, but those were much smaller lists. The angels would hand out the lists as the pigeons flew by to snatch them up. Apparently, you can get your name on the list by being unkind, rude, or just plain insulting to someone else.

I thought it was just Grandmother being funny until one special Friday the 13th. We were walking home from the corner store. She had an umbrella. We had run into a Grandmother's friend with her new boyfriend. The man shook hands with Grandmother and said, "You sure smell good for an old lady."

My Grandmother was shocked by the man's remark and replied, "You are on my poop list; you Son of a Siberian Sea cook. Today is the day, and you have no umbrella."

Grandmother's friend came to his rescue by saying, "Well, you are on my poop list dear, you are an old woman. He was just telling the truth." She put her nose in the air. I was not sure if she was upset with my Grandmother for smelling so good or for calling her boyfriend a name.

We walked on and Grandmother muttered something about being called an old woman and her friend not being a young chick under her breath.

We walked a little further and were singing something about frogs having a belly ache when she suddenly noticed my shoe was untied. She stopped to tie my shoe and put her umbrella down. A pigeon dropped poop right on her head.

We both laughed. She shrugged her shoulders and said, "It is my fault for putting down my umbrella." I never forgot either. I once again asked her if being the son of a cook was worse than being a monkey's uncle. She, once again, replied it was much worse. She has no idea how long I felt sorry for the children of cooks. I had no idea what a Siberian Sea was, but it must be very hard to cook if cooking it labeled you for life. I often wondered what a sea tasted like, cooked, but did not dare ask. The logic of a six-year-old is somewhat flawed.

Carry a newspaper or something to cover your head on Friday the 13th. You don't know if someone has put you on their poop list. These are words of wisdom from a very wise woman. Everything else is just pigeon poop.