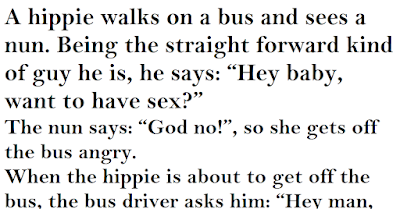 A hippie walks on a bus and sees a nun. Being the straight forward kind of guy he is, he says: “Hey baby, want to have sex?”
The nun says: “God no!”, so she gets off the bus angry.
When the hippie is about to get off the bus, the bus driver asks him: “Hey man, you see that graveyard across the street?”
The hippie: “yeah I see it, what about it?”
“Well every Tuesday night at 8:30, the nun go’s to the top of the hill to pray. If you dress up as a ghost, and tell her to have sex with you, she’ll have too”;
The hippie replied: “sweet!”.
So, Tuesday night comes and the hippie has a ghost costume, 8:30 comes and here comes the nun. The hippie pops out and says: “I am the ghost of a man buried here, and I command you to have sex with me!”
The nun: “Well… ok, but I have a virgins aspect so it has to be oral”
So the nun and the hippie have oral sex and the hippie runs away and says: “Ha, ha I was actually the hippie” and the nun replied: “Ha, ha I’m actually the bus driver!”
Article plus récent Article plus ancien