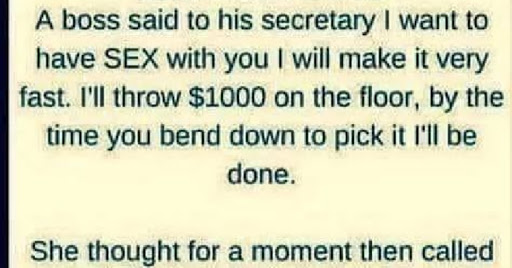 A boss said to his secretary I Want to have sex with you and I will make it very fast.

She thought for a moment then called her boyfriend and told him the story. Her boyfriend then said to her, do it but “Ask him for $2000, pick up the  money Very fast.

So he Wouldn’t even have enough time to undress himself.” So she agrees.

Half an hour goes by, the boyfriend decides to call girlfriend, he asks, What happened? She responds, “The Bastard used coins!”

The taxi driver knew that they were drunk so he started the engine turned it off again.

Then said, "We have reached your destination". The 1st guy gave him money the 2nd guy said "Thank you". The 3rd guy slapped the driver.

The driver was shocked thinking the 3rd drunk knew what he did. But then he asked "What was that for?".

The 3rd guy replied, "Control your speed next time, you nearly killed us!"