Home » »Unlabelled » Johnny Was Playing Outside

Johnny Was Playing Outside 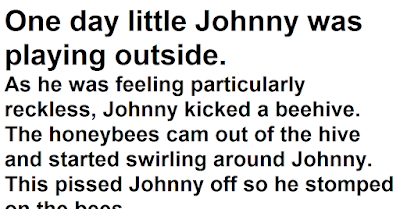 One day little Johnny was playing outside.

As he was feeling particularly reckless, Johnny kicked a beehive.

The honeybees cam out of the hive and started swirling around Johnny.

This pissed Johnny off so he stomped on the bees.

His father witnessed this and told him:

“Don’t do that! No honey for a month as a punishment for stomping on the bees.”

Later that week, Johnny squished a butterfly as it landed on his nose.

His father saw this and said:

“No Johnny! No butter for a month will be your punishment .”

Johnny and his father was watching.

“Are you going to tell her or should I?”