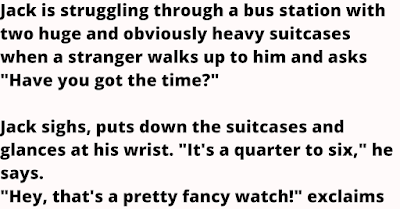 Jack is struggling through a bus station with two huge and obviously heavy suitcases when a stranger walks up to him and asks "Have you got the time?"

Jack sighs, puts down the suitcases and glances at his wrist. “It's a quarter to six,” he says.


Jack brightens a little. "Yeah, it's not bad. Check this out" - and he shows him a time zone display not just for every time zone in the world, but for the 86 largest metropoli.


He hits a few buttons and from somewhere on the watch a voice says "The time is eleven 'til six" in a very West Texas accent.


A few more buttons and the same voice says something in Japanese.


Jack continues "I've put in regional accents for each city". The display is unbelievably high quality and the voice is simply astounding.


The stranger is struck dumb with admiration. “That's not all,” says Jack. He pushes a few more buttons and a tiny but very hi-resolution map of New York City appears on the display. “The flashing dot shows our location by satellite positioning,” explains Jack.


"I want to buy this watch!" says the stranger.


"Oh, no, it's not ready for sale yet; I'm still working out the bugs," says the inventor.


"But look at this," and he proceeds to demonstrate that the watch is also a very creditable little FM radio receiver with a digital tuner, a sonar device that can measure distances up to 125 meters, a pager with thermal paper printout and, most impressive of all, the capacity for voice recordings of up to 300 standard-size books, "though I only have 32 of my favorites in there so far" says Jack.


"I've got to have this watch!" says the stranger.


Jack stops to think. He's only put about $ 8500 into materials and development, and with $ 15,000 he can make another one and have it ready for merchandising in only six months.


The stranger frantically finishes writing the check and waves it in front of him. "Here it is, ready to hand to you right here and now. $ 15,000. Take it or leave it."


Jack abruptly makes his decision. “OK,” he says, and peels off the watch.


They make the exchange and the stranger starts happily away.


“Hey, wait a minute,” calls Jack after the stranger, who turns around warily.


Jack points to the two suitcases he'd been trying to wrestle through the bus station.