Home » »Unlabelled » An Italian, a Scotsman, and a Chinese man are hired at a construction site.

An Italian, a Scotsman, and a Chinese man are hired at a construction site. 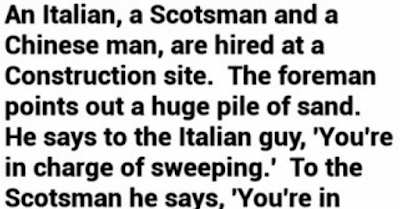 The foreman points out a huge pile of sand and says to the large, muscular, Scotsman he says, "You're in charge of shoveling."

To the slightly less muscular but still large Italian man, he says, "You're in charge of sweeping."

And to the skinny Chinese man he says, "You're in charge of supplies."

He then says, "Now, I have to leave for a little while. I expect you men to make a dent in that pile of sand."

So the foreman goes away for a couple of hours and when he returns, the pile of sand is untouched. He asks the Italian, "Why didn't you sweep any of it?"

He replies "I no hava no broom, you saida to the Chinese guy that he wasa ina charge of supplies, but he hasa disappeared and I no coulda finda him nowhere."

The foreman turns to the Scotsman and says, "And you, I thought I told you to shovel this pile."

The foreman is really pissed off now and storms off towards the pile of sand to look for the Chinese guy. As he approaches the mound, the Chinese guy leaps out from behind the sand and yells…