Home » »Unlabelled » He Thought His Wife Was Going To Kill Him. But Then This Happens...Priceless.

He Thought His Wife Was Going To Kill Him. But Then This Happens...Priceless. 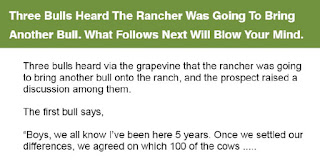 Three bulls hear the rancher is bringing another bull onto the ranch, and will most likely be reassigning cows to each one.

The first bull says to the others, “I've been here five years. I’m not giving this new bull any of my 100 cows.”

“I’ve been here three years,” says the second bull, “and have earned my right to 50 cows. I'm keeping all my cows.”

“I've only been here a year,” the third bull says, “and so far, you guys have only let me have ten cows. I may not be as big as you fellows, but I’m keeping all 10 of my cows.”

Just then, an 18-wheeler pulls up in the pasture carrying the biggest bull they've ever seen. At 4,700 pounds, each step he takes strains the steel ramp.

Terrified, the bulls immediately change tack. “I think I can spare a few cows for our new friend,” the first bull offers.

“I actually have too many cows to take care of. I can spare a few. I'm certainly not looking for an argument,” the second says.

They look over at the third bull and find him pawing the dirt, shaking his horns and snorting.

“Son, don't be foolish, let him have some of your cows and live to tell the tale,” the first bull urges.

“Hell, he can have all my cows, the third bull responds. "I'm just making sure he knows I'm a bull."