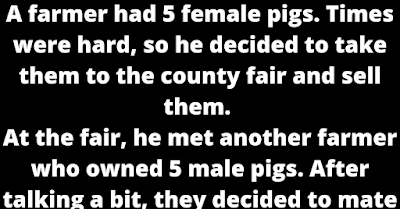 A farmer had 5 female pigs but times were hard and he needed a solution.

A farmer had 5 female pigs. Times were hard, so he decided to take them to the county fair and sell them. At the fair, he met another farmer who owned 5 male pigs. After talking a bit, they decided to mate the pigs and split everything 50/50.

The farmers lived 60 miles apart, so they decided to drive 30 miles each morning and find a field in which to let the pigs mate.

The first morning, the farmer with the female pigs got up at 5 a.m., loaded the pigs into the family station wagon (the only vehicle he had) and drove the 30 miles.

While the pigs were in the field mating, he asked the other farmer, "How will I know if they are pregnant?"

The other farmer replied, "If they're ...

A woman awakes during the night to find that her husband is not in bed.

An Elderly Lady Was Throwing A Party

A Man Gets A Prescription For Vi@gr@.