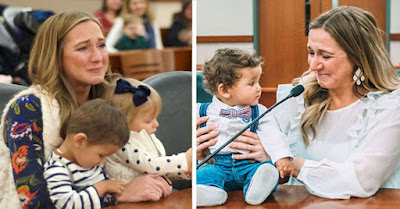 Four years ago, I was a newly divorced woman in her early 30s who was trying to find her path. God was calling me to be someone other than who I was at the time. As I looked in the mirror, I sobbed at the lady I saw. It was clear that I was not the woman my heart desired. To create a life that I could be proud of, I resolved to make positive changes in my life.

Over the next year, I changed jobs and acquired a ‘fixer upper’. In order to turn the house I bought into my dream home, it would require a great deal of work, most of which I would have to do myself. I told my friends at the time that the house was fit for ‘more,’ despite the fact that I had no idea what that meant.

My pastor sent me an email just a few weeks after I had moved into my new house, amidst half-torn out floors, ripped out cabinets, and never-ending paint projects. Normally, I only read them on occasion, but an instructional session regarding foster care piqued my interest this time.Never before had I met anyone who had fostered children or grown up in a foster home. Although I had no prior knowledge of it, my heart compelled me to learn more. ‘Would you like to attend an instruction session on foster care with me?’’’ I asked my mother, who was assisting me with the renovations. I was shocked,’’’ she exclaimed.She accompanied me to the meeting, despite warnings and discouragements that this new house and new job were too much for me to handle, and that fostering a child was the LAST thing I should be doing at the time. I was terrified by what I heard about foster care that evening, but it also tugged at my heart in a way I couldn’t forget.As a single, full-time working woman, I continued to pray and consider adopting traumatized children. I completed my application on Mother’s Day in 2015 and took the next step toward becoming a foster mom and embarking on a new journey.In a year, my fourth foster child, a 13-month-old newborn boy, filled my heart with joy and convinced me that I wanted a long-term placement. Up until that point, I had primarily focused on temporary placements, but I was cautiously open to fostering-to-adopt if the opportunity arose. I expressed my desire to be a child’s forever home (or at least a long-term placement for a year or more) at my next home visit with my caseworker.During my [workday] a few weeks later, I received a message from my caseworker regarding a baby boy who had been abandoned at the hospital and was likely to be placed in a foster-to-adopt arrangement. In spite of exposure to drugs, he showed no signs of withdrawal and was expected to be discharged the next day. ‘I want him!’ I said as soon as I got off the phone with her. Don’t talk to anyone else for the next five minutes.Fortunately, my mother was eager to help and I left the hospital with a beautiful and small baby only 24 hours after giving birth. The nickname ‘Baby Boy’ was given to him because his mother abandoned him shortly after his birth and had not given him a name.I didn’t have much time to think about names, so I scanned the list of baby names I’d gathered over the years and chose Grayson, because by God’s grace, I now had a son (potentially forever).

For the following 11 months, we searched for his mother and father, but the information left at the hospital never led to anyone. Newspaper ads were not responded to or anyone returned to the hospital in search of the boy who had been abandoned that day.I was relieved that no one stepped forward, ensuring that he would always be mine without opposition. Although the thought of having to tell my son that no one showed up for his termination hearing made me sick to my stomach. Nobody came to investigate. Despite the fact that I had longed for and prayed for my little man since I was a child, I knew that conversation would be one I would dread for years.

“A child born to a different lady calls me mommy. “The tragedy and the honor are not lost on me.” – Landers, Jody.