Home » »Unlabelled » Joke of the day : A passenger on the plane was being difficult – but the flight attendant's response is fabulous

Joke of the day : A passenger on the plane was being difficult – but the flight attendant's response is fabulous 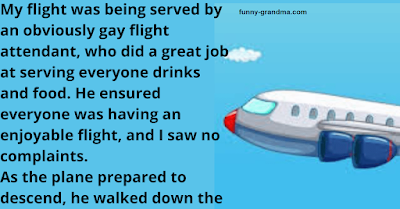 My flight was being served by an
obviously gay flight attendant, who
did a great job at serving everyone
drinks and food. He ensured
everyone was having an enjoyable
flight, and I saw no complaints.
As the plane prepared to descend,
he walked down the aisle and
relayed directions from the captain
of the plane.
“Captain Harry has asked me to
announce that he’ll be landing the
big scary plane shortly, so lovely
people, if you could just put your
trays up, that would be super.”
On his trip back up the aisle, he
noticed this well-dressed Arabic
woman who had not followed
directions. Her tray was completely
down.
“Perhaps you didn’t hear me over
those big brute engines when I
asked you to raise your trazy-poo,
so the main man can pitty-pat us on
the ground.”
She calmly turned her head and
said, “In my country, I am called a
Princess and I take orders from no
one.”
To which the flight attendant replied, without
missing a beat, “Well, sweet-cheeks, in my
country I’m called a Queen, so I outrank you.
Tray up, B****!”
Article plus récent Article plus ancien