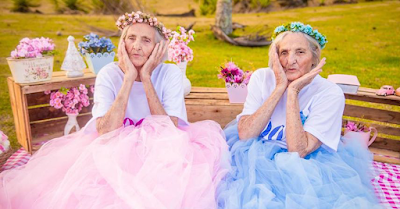 Maria Pignaton Pontin and Paulina Pignaton Pandolfi are identical twin sisters from Brazil who have seen and experienced a lot in their lives.

They are from Ibiraçu, in the northeast of Esprito Santo, Brazil. Paulina lives in Jo*o Neiva, and Maria lives in Aracruz.

Prior to their 100th birthday celebration on May 24, a Brazilian photographer offered them a free photo session, which they accepted.

“I had never met anyone over 100 before, let alone twins! Vintage News spoke with photographer Camila Lima, who offered the photo session as a gift to the family.

When Lima saw a local TV report on the twin sisters, she thought, “this is a moment that should be remembered forever.” Lima was so amazed by the story that she decided to offer the twin sisters a free photo session.

Lima said she loves the elderly and has been taking photos of them for a year. My love for photographing old couples inspires my young couples, since I photograph many young couples,” she added.

For a long time she photographed elderly people of all ages, but she says that Maria and Paulina “were the only ones who did not complain about tiredness” and never complained about limitations of any kind.

Twin sisters put on beautiful dresses, did their hair and put on makeup for a professional photo shoot. “We were all very excited,” the photographer said.

According to Lima, the sisters were “excited and happy” during the experience.

They were willing to do anything she asked of them, and she said they enjoyed the photo shoot.

Many of the sisters’ children, grandchildren, and great-grandchildren attended their birthday celebrations at home.

Paulina had already suffered from numerous health problems, including cancer of the intestines and two heart attacks, according to the photographer. The doctors did not think she would be able to overcome her health problems, but Dona Paulina recovered from them all.

Her sister, Dona Maria, hasn’t had any health problems like Dona Paulina did. Carlos Pontim, Maria’s son, described her as a very cheerful person and said that she and his aunt remain active and healthy up until the present day.

When one of them is having trouble, the other despairs, but when they’re doing well, they can’t agree on anything, but they can’t live without one another,” Lima told the Vintage News.

Even though both babies were born on May 24, the party was scheduled four days earlier. As their family is quite large, more than 100 people attended the party.

Both Maria and Paulina are still lucid and spent hours walking around the neighborhood. Carlos told Gazeta Online that his mother recently attended a wedding and stayed until 2 a.m. at the party. He hopes that the rest of the family would be as important as they are.

Marie and Paulina are not the oldest female twins in the world and according to Guinness World Records, Raymonde Saumade and Lucienne Grare (née Wattebled), who were born on September 23, 1912, in France, are the oldest.