Home » »Unlabelled » A Lawyer And An Old Man Played A Game

A Lawyer And An Old Man Played A Game 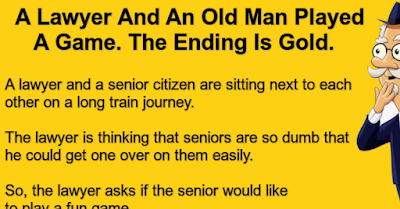 A lawyer and an elderly person sit next to each other on a long train journey.

The lawyer thinks the old people are so stupid that he could easily catch up with them.

So the lawyer asks if the senior would like to play a fun game.

The eldest is tired and just wants to take a nap, so he politely declines and tries to catch some winks.

The lawyer persists, saying the game is great fun.

This catches the senior's attention and, to silence the lawyer, he agrees to play along.

The lawyer asks the first question.

"What is the distance between the Earth and the Moon?" »

The elder doesn't say a word, but reaches into his pocket, pulls out a five dollar bill and hands it to the lawyer.

Now it's the seniors' turn. He asks the lawyer,

"What goes up a hill with three legs and comes down with four?"

The lawyer uses his laptop to research all the references he can find on the Net.

He emails all the smart friends he knows; All in nothing.

After an hour of searching, he finally gave up.

The eldest pocketed the $500.00 and went back to sleep immediately.

The lawyer goes crazy without knowing the answer.

He wakes up the elder and asks,

"Well, then what goes up a hill with three legs and comes down with four?"

The eldest reaches into his pocket, gives the lawyer $5.00 and goes back to sleep.

Age and cunning will overcome youth and technology at all times.