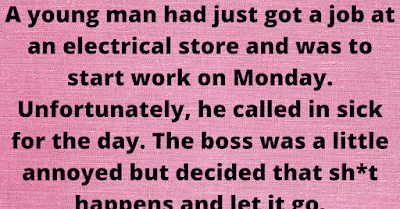 A young man had just got a job at an electrical store and was to start work on Monday.

Unfortunately, he called in sick for the day. The boss was a little annoyed but decided that sh*t happens and let it go.

The guy came in Tuesday and sold a stack of electronics, and continued on for the rest of the week selling record amounts of computers and TVs and other goods.

The following Monday, the boss got a call - it was the new employee calling in. "Sorry boss - I'm really sick!" The boss was getting more annoyed with him.

Tuesday the young guy was in and selling even more than last week. He finished up the week making a new record for sales for his state.

Next Monday the new guy called in sick again and the boss decided it was time for a chat with him.

So on Tuesday the guy rocks up to work and the boss pulls him aside. "Bob, you're a great salesman, but you keep calling in sick on Mondays - What's going on?"

"Well boss. My sister's just gone through an awful divorce and she calls me every Monday morning crying, so I go over to her house and comfort her. We always wind up making love for the rest of the day..."