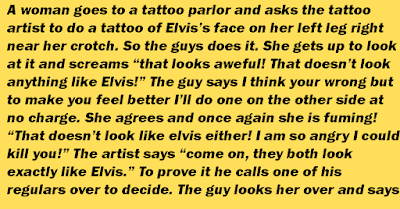 A woman goes to a tattoo parlor and asks the tattoo artist to do a tattoo of Elvis’s face on her left leg right near her crotch. So the guys does it. She gets up to look at it and screams “that looks aweful! That doesn’t look anything like Elvis!” The guy says I think your wrong but to make you feel better I’ll do one on the other side at no charge. She agrees and once again she is fuming! “That doesn’t look like elvis either! I am so angry I could kill you!” The artist says “come on, they both look exactly like Elvis.” To prove it he calls one of his regulars over to decide. The guy looks her over and says “I’m not too sure about the two on either side but that one in the middle is the spit’n image of Willie Nelson.”