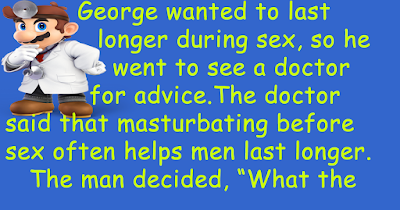 George wanted to last longer during sex, so he went to see a doctor for advice.
The doctor said that masturbating before sex often helps men last longer.
The man decided, “What the hell, I’ll try it.”
He spent the rest of the day thinking about where to do it. He couldn’t do it in his office. He thought about the restroom, but that was too open. He considered an alley, but figured that was too unsafe.
Suddenly, George had a flash of inspiration, and he realized what he should do.
On his way home, he pulled his truck over on the side of the highway. He got out and crawled underneath as if he was examining the truck’s undercarriage.
Satisfied with the privacy, he undid his pants and started to masturbate.
Thinking that the car’s undercarriage was a bit of a turn-off, he firmly closed his eyes and thought of his lover. As he grew closer to the big finish, he felt a quick tug at the bottom of his pants.
Not wanting to lose his mental fantasy or the orgasm, he kept his eyes shut and replied, “What?”
He heard, “This is the police. What’s going on down there?”
The man replied, “I’m checking out the rear axle, it’s busted.”
Then he heard the reply,
“Well, you might as well check your brakes too, because your truck rolled down the hill 5 minutes ago.”
Article plus récent Article plus ancien