True Story That Happened In Canada 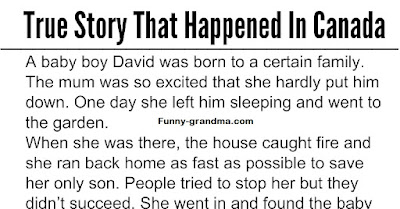 TRUE STORY THAT HAPPENED IN CANADA

A baby boy David was born to a certain family.

The mum was so excited that she hardly put him down.

One day she left him sleeping and went to the garden.

When she was there, the house caught fire and  she ran back home as fast as possible to save her only son.

People tried to stop her but they didn’t succeed.

She went in and found the baby untouched.

Unfortunately her hair caught fire as she was going out and she started burning.

It was very bad for the rest of her life because she had to live with a scar.

The boy grew up and became very rich and shifted to town.

But in the real sense, he was ashamed of his mother's scars.

When people asked him, he would say, "l don’t have someone so ugly in our family as my mother".

One day his mum overheard how his son was telling people and she was very disappointed.

She decided to travel to town to explain to his only son what had happened and the reason behind her ugliness.

But unfortunately, the bus she was travelling with, got an accident and the mum died instantly.

The boy heard of the news, and felt very happy.

He then rushed to the village and found people sad.

He just passed them and went direct to her mother's room to search for important documents.

He was shocked to find her MUM's oldest DIARY BOOK written,