Joke Of Today: Four men waiting in the hospital 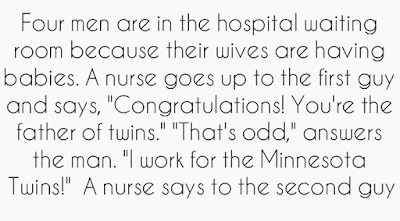 Joke Of Today Four men are in the hospital waiting room because their wives are having babies. A nurse goes up to the first guy and says, "Congratulations! You're the father of twins."

"That's odd," answers the man. "I work for the Minnesota Twins!"

A nurse says to the second guy, "Congratulations! You're the father of triplets!"

"That's weird," answers the second man. "I work for the 3M company!"

A nurse tells the third man, "Congratulations! You're the father of quadruplets!"

"That's strange," he answers. "I work for the Four Seasons hotel!"

The last man is groaning and banging his head against the wall. "What's wrong?" the others ask.