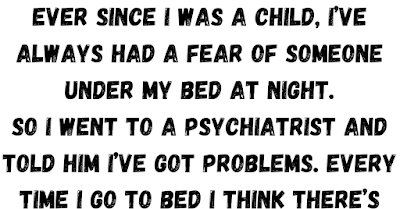 Ever since I was a child, I’ve always had a fear of someone under my bed at night.

So I went to a Psychiatrist and told him I’ve got problems. Every time I go to bed I think there’s somebody under it. I’m scared. I think I’m going crazy.

"Just put yourself in my hands for one year," said the psychiatrist. "Come talk to me three times a week and we should be able to get rid of those fears."

"How much do you charge"

"I’ll sleep on it and if needed I will come back to you," I said.

Six months later the Psychiatrist met me on the street.

"Why didn’t you come to see me about those fears you were having" he asked.

"Well, Eighty bucks a visit three times a week for a year is an awful lot of money! A bartender cured me for $10. I was so happy to have saved all that money that I went and bought me a new SUV."