Home » »Unlabelled » A man buys several sheep, hoping to breed them for wool.

A man buys several sheep, hoping to breed them for wool. 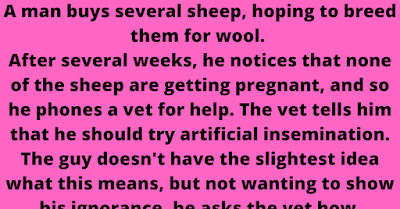 A man buys several sheep, hoping to breed them for wool. After several weeks, he notices that none of the sheep are getting pregnant, and so he phones a vet for help. The vet tells him that he should try artificial insemination.

The guy doesn't have the slightest idea what this means, but not wanting to show his ignorance, he asks the vet how he will know when the sheep are pregnant. The vet tells him that they when they are pregnant they will stop standing around, and instead will lay down and wallow in the grass.

The man hangs up and gives it some thought. He comes to the conclusion that artificial insemination means he has to impregnate the sheep himself. So, he loads the sheep into his truck, drives them out into the woods, has sex with all of them, brings them back, and goes to bed.

The next morning he wakes up and looks out at the sheep. Seeing that they are all still standing around, he concludes that the first try didn't take, and loads them into the truck again. He drives them out to the woods, bangs each sheep twice for good measure, brings them back, and goes to bed.

The next morning he wakes to find the sheep still just standing around. One more try, he tells himself, and proceeds to load them up and drive them out to the woods. He spends all day shagging sheep, and on returning home, falls exhausted into bed.

The next morning he cannot even raise himself from the bed to look at the sheep. He asks his wife to look out and tell him if the sheep are laying in the grass. "No," she says, "they're all in the truck and one of them's honking the horn."