Home » »Unlabelled » All The Chickens Gathered Around The New Rooster.

All The Chickens Gathered Around The New Rooster. 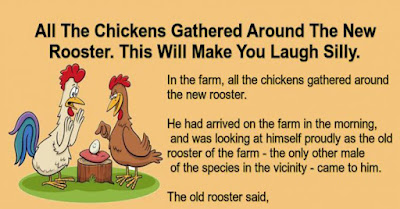 In the farm, all the chickens gathered around the new rooster.

He had arrived on the farm in the morning, and was looking at himself proudly as the old rooster of the farm – the only other male of the species in the vicinity – came to him.

“See, boy, this is my farm. I challenge you to compete. If you win, you rule the farm. Fair enough?”

So the old rooster explained,

“I will start from this line, and reach master’s porch. Since I am much old, I will have 3 second’s handicap. After 3 seconds, you will start. If you could bite my crown before I reach the porch, you win.”

“That’s an easy one…” Thought the young rooster.

And they assembled for the race.

At the clap of a beautiful hen, the old rooster began running.

As he shortened the distance, the old one started to shout out loud strange quaking sounds and ran here and there, young rooster closely following and trying to bite his crown.

A rifle shot from the porch.

Farmer rested his rifle on his shoulder, and looking down to the dead young rooster, said,

“Damn… What’s wrong with them…? This is the third rooster I bought in a row, and every single of them was homos*xual!”